The Tuzla Community Foundation in Bosnia and Herzegovina, located in one of the oldest, continuously inhabited cities in Europe, celebrated its relatively short but vibrant 10-year history in 2013 as the country’s first community foundation.

“One of our missions is to encourage people to give — to give their time, their energy, their money — and to get involved in their community,” said Jasna Jašarević, executive director of Tuzla’s community foundation.

When established in 2003, it was both an independent grantmaker and a services provider; its initiatives included a neighborhood center, local television project and youth leadership training program. Recently, the foundation transferred those responsibilities to other nonprofit organizations and now is focused on serving solely as a community leader and a local funder of others’ work.

In this dual role, Jašarević says, the foundation strives to actively involve Tuzla residents in improving their lives, especially young people under age 24, who comprise nearly 30 percent of the country’s population.

“We are involving our youth so they can learn new skills in grantmaking, communications and decisionmaking,” she said.

To engage its young people, the Tuzla Community Foundation in 2004 started YouthBank, an international youth grantmaking program. It began small with 25 youth, but Jašarević says that today more than 200 young people are learning skills such as how to write and review grant proposals, speak in public and interact with the media. In one village alone, the young grantmakers have funded a new playground, organized sports tournaments and held successful social events to break down barriers between generations and ethnic groups.

Through Tuzla’s YouthBank program, local young people have traveled to meet their peers in Poland, Northern Ireland and elsewhere. By using the Internet, they regularly share their ideas, challenges and successes with youth in Belgium, Finland, Italy, Turkey and other countries.

“We see YouthBank as a way to provide learning opportunities that our youngsters would not get otherwise,” Jašarević said. 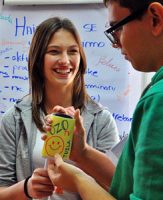 Although youth comprise an important share of the foundation’s work, they are not its only focus.

The community foundation works to build bridges between municipalities, businesses, nonprofit organizations and local donors to help make Tuzla a more livable place, she said. For instance, the foundation promotes community education throughout Tuzla as a holistic and inclusive approach to community development and civic engagement. This approach addresses residents’ civic, social, cultural, recreational and educational needs by welcoming all — including vulnerable groups such as the unemployed, elderly and disabled — to attend events and participate in activities in public school buildings.

Before, during and after traditional class hours, schools are now used as community centers where people of any age can, among many other activities, surf the Internet, speak another language, play table tennis, participate in traditional dance classes, and meet with neighbors and community leaders to discuss local concerns.

“The community foundation is seen as a promoter of non-formal education and life-long learning,” Jašarević said. “We support the community education model because it provides programs in response to the needs of the people of Tuzla. Community schools are of vital importance for a community’s development because they are generators of new ideas for positive changes.”