Brazil’s development: Is it sustainable for people and planet?

The issues Mario Osava covers as a Brazil-based journalist are all over the map — literally and figuratively.

“I do a type of journalism that I call ‘explicative’ or ‘explanatory,’ which isn’t exactly investigative journalism,” he said. “It aims to explain processes. We try to answer the ‘how’ and ‘why’ questions and educate people about trends.”

Since 2006, the Charles Stewart Mott Foundation has given IPS two grants totaling $350,000 — one to IPS North America and the other to IPS Latin America, which was earmarked for increased journalistic coverage of infrastructure and energy issues in South America. Both grants were made through Mott’s Environment program under its International Finance for Sustainability focus area.

Self-described as “the world’s leading news agency on development, environment, human rights and civil society,” IPS’s historical mission is to give a voice to the voiceless, especially for issues related to mega-development projects.

The Foundation’s support has enabled Osava, 63, to realize his nearly two-decade-old dream of having the time and finances to dig deep and uncover the effects of large infrastructure projects on Brazil’s 192 million residents, their livelihoods and the local environment.

A typical day for Osava includes traveling by plane, boat or car to the far reaches of Brazil to interview people face-to-face about economic and social issues, such as poverty, human rights and the environment. Oftentimes, he talks with indigenous people living in the Amazon Basin once routinely excluded from local media reports. But today their viewpoints, along with those of leaders from the public and private sectors, are shared with IPS’s global audience.

Sometimes, Osava’s articles trigger emails, phone calls and even visits from inquisitive readers around the world. He is frequently asked to connect journalists and researchers with hard-to-reach indigenous groups. In the past, for example, a group from the U.S. wanted to see firsthand how the country produces ethanol. In another instance, a team of documentary filmmakers from Argentina was researching agricultural methods used during the past 80 years.

“It is very rewarding for me to visit projects. These stories were not based on other people’s testimonies or from phone interviews, but by contacting people in their local reality, far from the big cities such as in the Amazon,” he said. “I could finally travel along the Xingu River and hear from some of its oldest settlers with their fabulous stories.”

Among other issues, Osava has reported on the following topics during the past few months:

More than 100,000 subscribers — including staff from mainstream and online media outlets, academic institutions, environmental groups, other non-governmental organizations (NGOs) and the general public — access IPS’s daily reports via radio, print and the Internet. 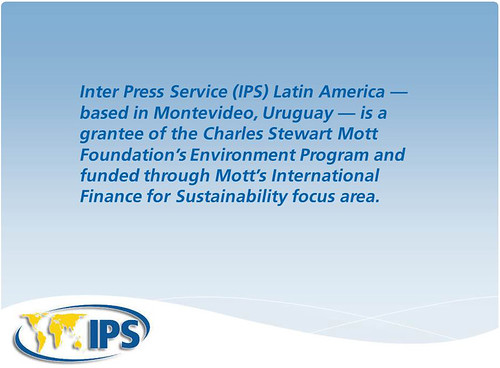 Based in Montevideo, Uruguay, IPS Latin America is a locally owned and operated NGO and a member of the IPS News Agency consortium, with member offices in Africa, Asia, Europe and North America.

Joaquin Costanzo, IPS Latin America’s regional director, says Brazil’s economy has grown steadily despite the worldwide recession, surpassing Italy as the world’s seventh largest economy. Costanzo has watched the number of proposed mega-projects increase dramatically since he was named to his current IPS post in 2006. The growth, he says, has catapulted Brazil onto the global economic stage as an important player among a group that is often called the BRICS countries (Brazil, Russia, India, China and South Africa).

“Traveling to do these stories about how projects affect marginalized people is expensive because some places don’t have highways,” Costanzo said. “When Mario reports from the northern area — the Amazonia state — he travels six or seven days because it is very isolated, but he has noticed things that are not well known at all. The only way to know about them is to go there and see it.”

IPS strives to keep the public informed about the potential impact of dozens of development projects in Brazil, he says, including those funded by international financial institutions (IFIs), such as the Inter-American Development Bank (IDB), International Monetary Fund (IMF) and the World Bank. IPS also reports on projects within Brazil — and elsewhere in the world, particularly on the African continent — that obtain loans from the country’s own funding arm, the Brazilian Development Bank (BNDES).

It is challenging for IPS staff to keep abreast of the many IFI-funded projects, but its role is to report whether the development requirements are being met for the projects as well as the potential risks and benefits, Costanzo says.

So assigning a Brazilian reporter such as Osava, with four decades of experience, was crucial. Respected for his journalistic accuracy and professional integrity by local residents, developers and government officials, Costanzo says, Osava was the perfect correspondent for the Mott-funded position.

“We are journalists because we believe in the power of communication. We trust that if IPS produces accurate information, it allows us to increase people’s consciousness and helps them make decisions,” Costanzo said. “Good communication is the beginning for all processes of change.”