Beekeeping in Bosnia provides much more than honey

For Milada Grabovica, the worst day on her current job was getting stung by about 50 bees. Still, the 26-year-old says her worst day as a beekeeper was better than her best day as a waitress.

“In the beginning it wasn’t so easy and I was afraid, but now I really love this job,” she said.* “I prefer to work outside. Watching bees produce honey is relaxing for me, and the bees are not so negative — like when I was serving people.”

Grabovica is a full-time employee of EkoMozaik, one of the fastest-growing organic honey producers in Bosnia and Herzegovina. The for-profit company was founded in 2009 and is in Sekovici, a town in northeastern Bosnia that had the highest unemployment in the Republic of Srpska (nearly 70 percent) when the business started hiring almost two years ago.

EkoMozaik was established by Mozaik Community Development Foundation, a national, nonprofit grantmaking organization created in 2000 and based in Sarajevo. The for-profit company was designed to generate funds for Mozaik’s social and economic development projects, which reach rural community groups, youth, children with special needs and many others. 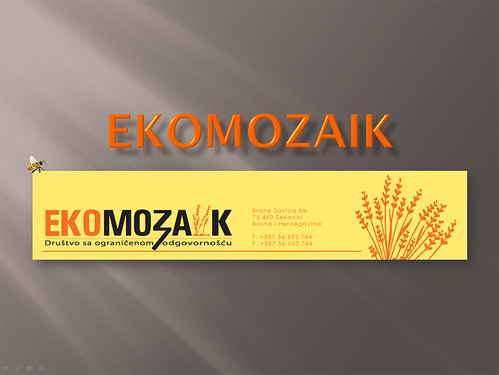 The Charles Stewart Mott Foundation first supported Mozaik in 2001 (when it was called Bosnian NGO Foundation) as part of a grant to CARE USA. In 2003, Mott began providing direct funding to Mozaik. Through its Civil Society program, Mott has provided eight grants to Mozaik, totaling $946,000.

Today, because of EkoMozaik’s presence in the region, 115 fewer residents are unemployed. While most jobs in Sekovici pay a monthly wage of $300 or less after taxes, EkoMozaik employees earn up to $500 monthly after taxes.

Like EkoMozaik’s 14 other beekeepers, Grabovica has learned several new skills. She says she is pleased to earn a living wage — and even has a bit extra to pay a portion of her part-time college fees.

In addition to building beehives indoors in winter, Grabovica is responsible for tending 70 hives in summer. She also frequently joins 100 rural women who work in a massive greenhouse where lavender seedlings are grown before they are transplanted into nearby agricultural fields to attract bees.

For many women, working in the greenhouse and the fields is their first paid job, says Zoran Puljić, Mozaik’s executive director since 2001. Providing employment was one of the major reasons the business was created, he says.

Helping ensure Mozaik’s sustainability was another. From his earliest days at the nonprofit organization, Puljić says, he never lost sight of Mozaik’s need to generate a cash flow to support its many activities because he believes international funders eventually will pull out of the Western Balkans region.

A third and equally important reason for launching EkoMozaik, he says, is to start the process of reconciliation among the country’s major ethnic groups following the breakup of the former Yugoslavia and the war in Bosnia that resulted in more than 100,000 deaths and hundreds of thousands of misplaced people between April 1992 and December 1995.

Although the Bosnian war ended more than 15 years ago, ethnic tensions remain high, he says.

“Before the war, what mattered most was what kind of person you were, not what your ethnicity was,” Puljić said.

“But not everybody is ready for reconciliation,” Puljić said. “Many do not want to be friends with other ethnic groups, so what happens if you use a different reason for getting them together? Needing a job and having to earn a livelihood to feed your family is a common interest everybody understands.”

Thus, EkoMozaik purposely hires workers from the country’s three ethnic groups, says Kristina Šešlija, EkoMozaik’s director. She calls 37-year-old Puljić a “social entrepreneur and a visionary” for developing a business that can address the nation’s major issues — unemployment, ethnic relations and a need for indigenous funding for nonprofit organizations.

Many of Mozaik’s 30 full-time employees, and its local and international volunteers, agree. And they are not alone.

In May 2010, Puljić was named “Social Entrepreneur of the Year” for Central/Eastern Europe by the Schwab Foundation for Social Entrepreneurship, an affiliate organization of the World Economic Forum. He and other regional winners were invited to attend the forum’s annual gathering in Davos, Switzerland, in January 2011. That meeting, coupled with the attention focused on Mozaik because of the international award, provided opportunities to share the organization’s community-driven development methodology with a broad audience, Puljić says.

In essence, this method strives to involve residents in analyzing their community needs, identifying solutions based on available resources, developing a plan of action and implementing the plan.

Initially, Mozaik provided 75 percent of the funding needed for community projects while local sources — government, business and/or private individuals — provided the other 25 percent for projects such as organizing concerts, creating or renovating local parks and sports areas, and repairing bridges. But that formula has been turned upside down, Puljić says, with Mozaik now paying 25 percent of project expenses while other partners pay the bulk of the costs.

He expects EkoMozaik, the for-profit business, to expand its product line to include a variety of organic foods. But for now, bees are the main business, Puljić says.

While selling about 44,000 tons (20,000 kilograms) of honey annually — the amount expected to be sold in 2011 — would be a huge accomplishment, it won’t be EkoMozaik’s only barometer of success, he says. The for-profit company, along with the nonprofit Mozaik, will be measured by their impact, Puljić says.

If several goals are met — unemployed residents obtain living-wage jobs, ethnic groups interact peacefully and productively, and local resources are generated to meet local needs — then the communities in which Mozaik and EkoMozaik operate can be showcased as concrete examples of democracy at work, he says.

“Our name, Mozaik, goes along with our philanthropic philosophy. A mosaic is a beautiful piece of art. But when you look at the individual pieces, they aren’t much alone. Then you put them all together and you can see its amazing value and beauty,” Puljić said.

“It’s the same for a local community. If you want to solve the bigger problems, every individual’s input is valuable and needed. Having people involved at the community level can make a tangible and lasting impact.”